The International Organization for Qumran Studies

Here we also list news and events related to DSS research. These conferences are not organized by the IOQS. Members and Visitors are encouraged to send in information they wish to share to the IOQS secretary.

Provenance and the Dead Sea Scrolls

The topic of provenance has grown in importance within Qumran research over the past few years. Many researchers will be aware of the ASOR policy on unprovenanced artifacts and the SBL policy that is based upon it. The exact implications of such policies within our field of study may remain nevertheless unclear. Individuals may differ as to whether such policies are seen as sufficient with respect to the various issues they face (e.g., illegal trade and looting in general; presenting, publishing, or referring to unprovenanced material; authenticating material).

The IOQS would like to use this page as a forum for people to discuss the topic and to help them be able to develop opinions that are well informed. We would like to direct interested readers to the two articles linked here, which deal at length with the issue of provenance as it relates to the scrolls from Qumran. (We thank Brill for kindly allowing us to make these articles available here for download.)

Please feel free to join the discussion in the comments below (you must be registered to leave a comment).

Preliminary Programme for the 10th Meeting of the IOQS in Aberdeen, 4–8 August, 2019: “The Dead Sea Scrolls in the Context of Hellenistic Judea”

The Qumran Institute at the Faculty of Theology and Religious Studies at the University of Groningen is very pleased to announce the 2020 Dirk Smilde Fellow, Annette Yoshiko Reed. Thanks to the generous support of the Dirk Smilde Foundation and the Ubbo Emmius Funds, Professor Reed will be in residence at the Qumran Institute in Winter 2020 in order to work on her project “Judaism, Christianity, and the Forgotten Past,” and to run the corresponding research seminar.

“Judaism, Christianity, and the Forgotten Past”

The 19th and 20th centuries were marked by a series of manuscript discoveries–from Oxyrhynchus Papyri to the Dead Sea Scrolls and Nag Hammadi codices–that opened up astonishing new perspectives on the ancient Jewish and Christian past. Since then, much research has been dedicated to reconstructing fragmentary texts, lost voices, and forgotten sects and perspectives. Due to the success of this research, it is now an apt moment to step back and also consider what was forgotten, how, and why. The more we learn from the Dead Sea Scrolls and other such manuscript finds, the more we come to realize how much of the literary heritage of Second Temple Judaism came to be lost to later Jews and Christians. New questions arise, thus, about the selectivity in the preservation of the Second Temple past and the place of forgetting in the memory-making of Judaism and Christianity. This research project is an experiment in reassessing the Second Temple past and its reception within Judaism, Christianity, and modern scholarship, with a focus on what was forgotten.  Many studies have drawn on the Dead Sea Scrolls, for instance, to trace histories of interpretation and reception into Late Antiquity and beyond. But what might these data also tell us about loss, rupture, overwriting, and erasure? Is it possible to draw upon theoretical models from the study of collective memory and cultural amnesia better to understand these dynamics, and in the process, to recover a richer understanding of the evolving place of the Second Temple past in the contested identities and intertwined histories of Judaism and Christianity? And how much such perspectives, in turn, also challenge us to rethink our modern scholarly narratives about Jewish and Christian antiquity?

The Research Seminar will have as its backbone a series of lectures by the 2020 Dirk Smilde Professorial Research Fellow, Annette Yoshiko Reed. These lectures will focus especially on the Christian memory and forgetting of the Second Temple Jewish past, considering key moments from antiquity and modernity alike in which what we now know as the diverse Jewish literary heritage from this period was overwritten, at some times, and reworked, recast, and recovered, at others, shaping the continued formation of Christian identities in relation to Judaism.

Topics to be addressed in the weekly seminars led by participants might include:

Annette Yoshiko Reed is presently an associate professor in the Department of Religious Studies and the Skirball Department of Hebrew and Judaic Studies at New York University. Her research spans Second Temple Judaism and Late Antiquity, with a special concern for reception-history, so-called “apocrypha” and “pseudepigrapha,” and problems of historiography and identity. Her publications include Fallen Angels and the History of Judaism and Christianity (2005), Jewish-Christianity and the History of Judaism (2018), and Demons, Angels, and Writing in Ancient Judaism (forthcoming).

In coordination with Professor Reed’s fellowship, we will select (2) Dirk Smilde Scholarship recipients, junior scholars (PhD or Postdoc level) who will each spend 3 months at the Qumran Institute and participate in the research seminar and the intellectual community of the Institute. Calls for applications will be sent in Fall 2019. Please be on the look out and notify anyone who might be interested in this unique opportunity. 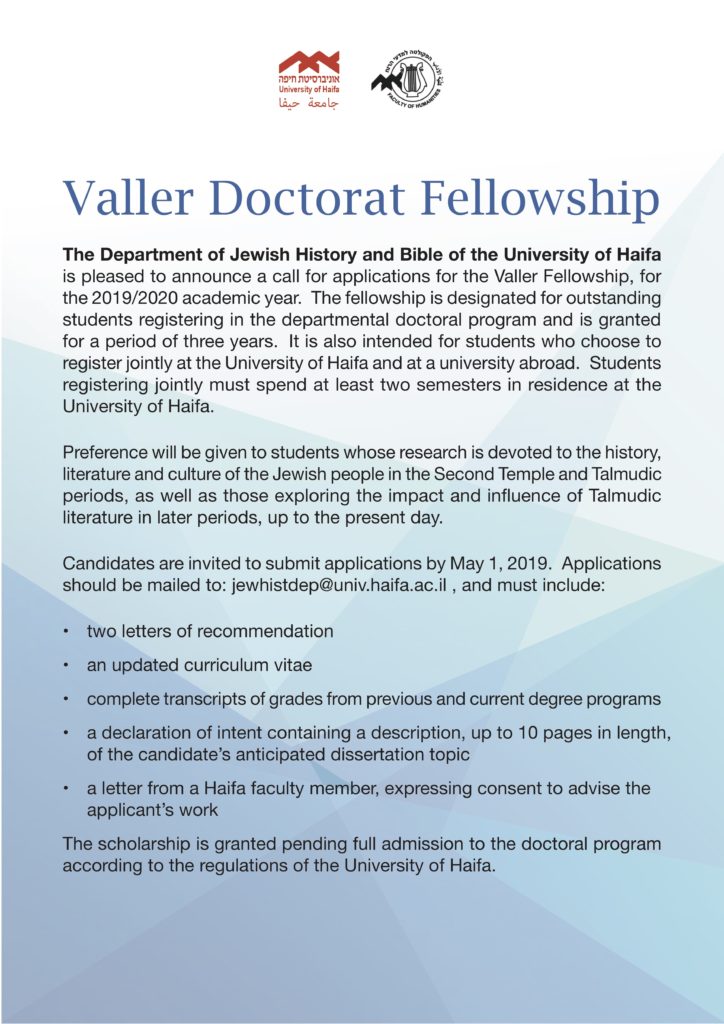 (Thanks to Patrick Angiolillo)

Since the online proposal submission system is the same for IOSOT and all the affiliate meetings, …

… the IOQS deadline for submitting papers is also extended to March 10, 2019!

(On behalf of Claude Cohen-Matlofsky)

A Halakhic Concordance in the DSS, Philo, Flavius Josephus and the New Testament (and more broadly the Second Temple Sources)

The goal of this research project is the production of a text-critical multiple volumes corpus of comparative Halakhah based on all currently available Second Temple sources. The purpose is to show both the concordance and discordance in the observance of Halakhah and the discussions in process for Halakhah in Second Temple period sources; in other words: the « Halakhah in the making ». Please note that we intend to leave aside the rabbinic literature for purpose of methodology.
Furthermore, the use of the terms « Halakhah » and « halakhic » for the project will be discussed in introduction of the corpus.

Presenters will have ample time to present their work, followed by a generous period for discussion with other symposium participants, including Eyal Regev, Tal Ilan, Vered Noam.

We invite paper proposals from scholars, advanced doctoral students, recent PhDs, and postdocs, whose work addresses the questions of our symposium. Proposals of 1,000–2,000 words, based on projects that are well under way, should be sent to Claude Cohen-Matlofsky (claudematlofsky|at|hotmail.com).

The German-Israeli research project Scripta Qumranica Electronica seeks applications for a post-doctoral fellowship at the University of Haifa. This is an opportunity for gaining expertise in advanced methodologies of scrolls research and digital editions, in a cooperative environment.

The fellowship term is October 2019 – March 2021. Prolongation until October 2021 is possible. The annual sum of the fellowship is 22,000 Euro (payed in Shekels), and the relative part thereof for additional months. No further benefits are provided.

The project Scripta Qumranica Electronica develops new tools and digital editions of the Qumran Scrolls, in cooperation with the universities of Haifa, Tel Aviv, and Göttingen, as well as with the Israel Antiquities Authority. The Haifa branch of the project focuses on the creation of digital editions, using paleography, philology, material reconstructions and digital tools. In particular, the team studies the cryptic texts from Qumran and the copies of the composition ‘Musar LaMevin’.

The successful candidate will:

Candidates will send the following documents to Prof. Jonathan Ben-Dov:

Last application date: March 25th 2019. Queries can be sent to the address above.

Mardi 11 décembre 2018:
Loren Stuckenbruck (Université de Munich): « The Concept of Time in the New Testament: From Ethiopic Enoch to the Dead Sea Scrolls and Back Again »

Theme by Anders Noren — Up ↑